When I was a kid growing up I didn’t get to play every single new game or console that was available because my family wasn’t exactly the wealthiest. Games have always been an expensive hobby to have so when my mom did buy me and my siblings a new game to play we would end up playing that game for months or years until we got a new one. In fact the only time we would get new games would be either for Christmas or birthdays. In a way, I’m grateful for that because this taught me to appreciate the things I have a whole lot more as an adult. Now some of you might be thinking how did I manage to play the same games for such a long period of time without getting bored? Well, the truth is a lot of older games were either hard as hell or just very unforgiving. As a kid a lot of the time they felt impossible to beat but I never stopped playing them because somewhere deep down I thought I could make the impossible happen. With that in mind I wanted to look back on a few games I never actually managed to beat as a kid because they were too hard. For the sake of time, I thought I’d keep it condensed and start with games from the first console I ever had, the Sega Genesis. 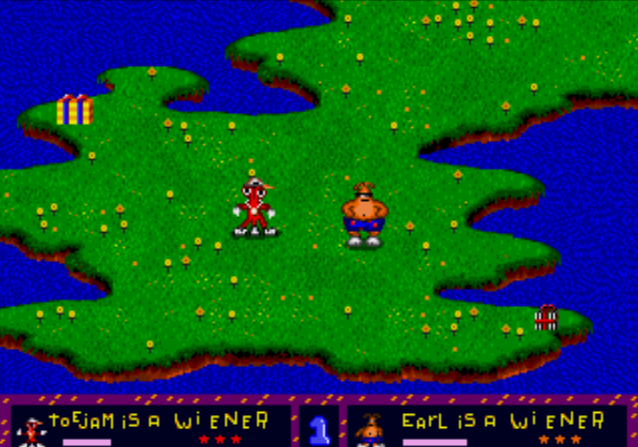 Released in the U.S. in 1991 ToeJam & Earl is an action game about two alien rappers who have crash landed on earth. As they try to collect all the pieces of their ship in order to escape they must also try to defend themselves from the inhabitants as well as the environment itself. Using presents randomly scattered throughout each level players can open them to find arbitrary items to assist them. The gifts contain a wide variety of things to take advantage of such as angel wings to fly over large pit holes, food to recover your health, and even rocket skates that can seriously help or hinder the player if you’re not prepared. I can’t tell you how many times I would open a gift and be surprised when I would uncontrollably start to dash around the screen inevitably falling off the current level.

Like the items in the game, there are a decent display of enemies that can take you out if you’re not careful. You have cupid firing arrows at you, packs of chickens shooting volleys of tomatoes, and even seemingly harmless mailboxes that relentlessly attack you if you get too close. My personal most hated being that god-damn hula dancer that forces you to dance if you get too close leaving you wide open to be attacked. I remember it being very infuriating when I got stuck in an endless stun-lock from her with a devil or something just stabbing me to death. The game is also co-op, one person plays as ToeJam and the other as Earl. ToeJam is the faster one with less health while Earl is a bit slower with more health. Even with help from my older brother we never managed to come close to making it through all the levels let alone finding all the ship parts. As difficult as the game may have been it still provided younger me with plenty hours of enjoyment. Yeah, it could be frustrating at times but I still have fond memories of just playing it with my siblings. 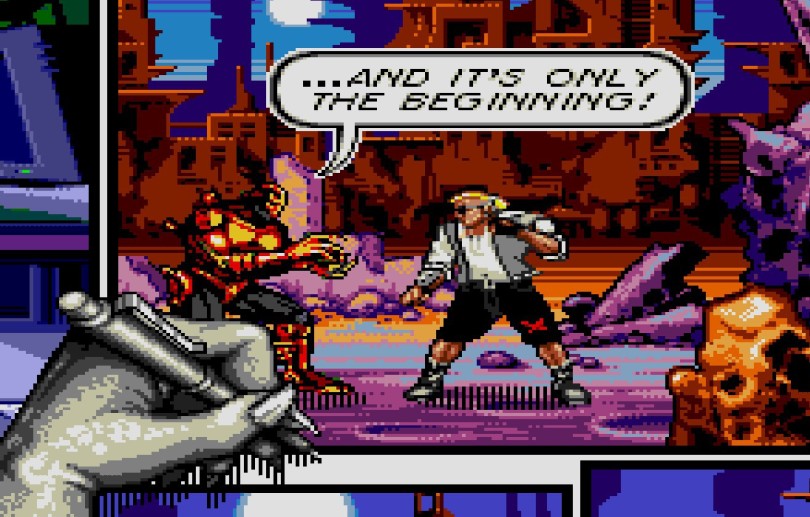 Comic Zone was one of my favorite looking games back in the day. I was a huge fan of the art style, it always looks really good to me compared to other Sega Genesis games. Comic Zone is a side-scrolling beat ’em up. The plot of the game is that you play as Sketch Turner, a rock musician and comic artist living in New York City. One dark and stormy night while working on his latest comic named “Comix Zone” a bolt of lightning strikes a page of his comic. At that moment the main villain of his own book escapes the pages and immediately sends Sketch into the comic in an attempt to kill him and gain permanent residency in the real world.

All throughout the game the player takes on all kinds of comic book villains as you fight your way from panel to panel. This game was very unforgiving simply because there was no option to save. It was either beat the game all the way through, which was no easy thing to do, or restart everytime you loaded the game up. I never even came close to beating this as a kid because the game was seriously hard. The furthest I ever made it was to was the second page. The enemies in this game can take a beating and you don’t exactly have the biggest health bar. You can find items every now and then to assist you, but a lot of the time I found myself struggling to make it as far as I could with less than a quarter of my life. It also didn’t help that you would take damage from breaking boxes or things in your way that you had no choice other than to destroy in order to progress. Comic Zone is one of those games I somewhat recently went back just to see if I could do better. As it turns out the game is still as difficult as I remember.

Who in the right mind thought the sequel to the original Pac-Man should be a side-scrolling adventure game where you don’t even directly control Pac-Man? Pac-Man 2: The New Adventure was released in 1994 as a point and click adventure game. I know that sounds weird considering when people think of Pac-Man the first thing that comes to mind is a yellow circle moving through a maze eating small dots and avoiding ghosts. I guess the people over at Namco were feeling ambitious and wanted to see how far they could push their game. In a nutshell, the story of Pac-Man 2 was to complete a bunch of meaningless errands that led to ridiculous scenarios as the classic group of ghost would try to get in your way. Eventually, you would take on the ghost witch herself and her bubblegum monster, that is if you could make it that far before rage quitting.

You see like I mentioned earlier Pac-Man 2 is a point and click adventure game, but instead of pointing and clicking you fire a slingshot to interact with the environment and direct Pac-Man. The most infuriating part to this is Pac-Man can be a moody piece of shit depending on your actions or what he encounters in the environment. For instance, if you continuously fire the slingshot at him he’ll get pissed off and ignore all the commands that you give, sounds fun right? There are other moods he can go through in the game each having an effect on the game. In addition to it being a point and click, Pac-Man 2 also had lots of puzzles. Honestly, the biggest reason I never beat this game as a kid was I just didn’t have the patience. The emotional states Pac-Man would go through combined with the super specific puzzles the game had would more often than not end up with me rage quitting the game. I have no idea why I spent so much time trying to beat this game other than out of sheer spite.

Number 2 – The Adventures Of Batman & Robin 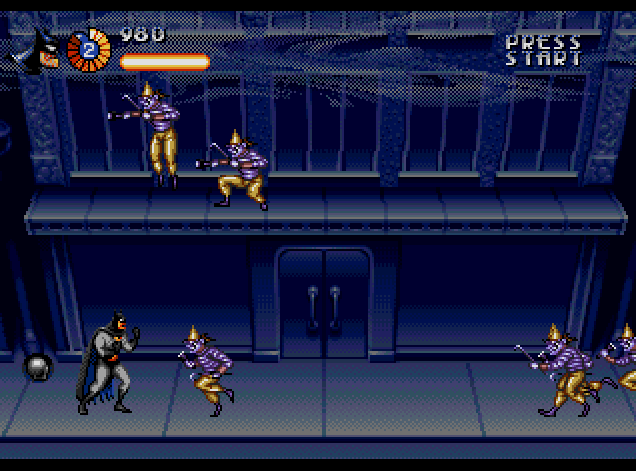 The Adventures Of Batman & Robin on the Sega Genesis was one of my all-time favorite games to play back in the day. Even though I never came close to beating it I still loved to boot it up and see how far I could make it. The game also had co-op, just being able to run through this gauntlet with one of my brothers made the game that much better. Released in 1994 The Adventures Of Batman & Robin is a classic in my eyes. The plot of the game was simple, Mr. Freeze wanted to freeze Gotham and it was up to Batman & Robin to stop him. Along the way, you would encounter other classic Batman villains like Two-Face, The Mad Hatter, and of course The Joker. I’m going to be completely honest here, I never even made it far enough to fight any of these guys. The closest I made it was the second Harley Quinn encounter of level 1. Say what you want but this game was no walk in the park at the time.

At any given moment there were mobs of enemies on the screen to fight and if you didn’t conserve your health you would be in trouble. For example, the first boss battle was a nightmare to younger me simply because trying to dodge all those shots felt impossible and if I didn’t have the right amount of health there was no hope for me. Despite the difficulty of the game, I would put this on my top 5 list of greatest Sega Genesis games of all time. The gameplay was awesome, the difficulty drove me to keep getting better, and the music was amazing. The soundtrack kept you amped up all the way through and really immersed you in the Batman universe. Although I never beat it The Adventures Of Batman & Robin still remains one of my favorite games from my childhood.

Chakan The Forever Man aka the game that confused the fuck out of me and was hard shit. Where do I begin with this game? Chakan or Chakan I don’t know how to say his name properly so we’ll just go with Chakan. Chakan The Forever Man is a game about a swordsman who challenges death to a duel with the promise of immortality if he wins. After becoming victorious in the battle Chakan gets his wish of immortality but at the same time is cursed to wander all of existence until all the supernatural evil is destroyed. The game starts with you in a hub world where you choose which area you want to start. There are four areas total containing 3 levels each representing earth, air, water, and fire. Players must fight their way through these levels along the way finding new weapons and potions to assist you in your journey. Sounds easy enough right?

Chakan The Forever Man is notoriously known for being unusually difficult. I just wish someone told me this before I played it as a kid. The enemies don’t mess around, the platforming takes near perfect coordination to not fall to an instant death, even the music is brutal to listen to any longer than 5 mins. Seriously is this something you want to hear while playing a game? It’s just an assault of garbage sounds violating your eardrums. This was one of those games I just couldn’t wrap my head around at all when I was younger. I still probably can’t beat this game now if I booted it up again. Chakan The Forever Man is simply the hardest game I played on the Sega Genesis as a kid. I give kudos to anyone who managed to complete it back then.

So this has been my top 5 games I couldn’t beat as a kid, the Sega Genesis edition. I might do more of these for different consoles I’ve owned in the past. Let me know if that’s something you’d like to see. Hopefully, you found this entertaining and Thanks for reading, I appreciate it. Perhaps leave me a list of games you were unable to complete when you were younger in the comments below.